One of the primary objectives of our campaign on maternal request caesarean is to highlight examples of best practice and celebrate the Trusts taking a woman-centred approach. One of the guidelines that really stood out to us was that of Birmingham Women’s Hospital (BWH).

BWH’s guideline on maternal request caesarean explicitly recognises that the evidence base around this decision is of very low quality. It uses language that recognises the woman as the lead decision maker such as, “If a woman has decided on CS” and, “at every appointment re-confirm (not challenge) decision”.

It came as no surprise to learn that BWH co-produced the guideline with service users who had faced this decision and had direct experience of the process. We spoke to Sara Kenyon, Professor of Evidence Based Maternity Care at the University of Birmingham, and the lead researcher on the project to revise the maternal request caesarean, about her experience of leading this project. 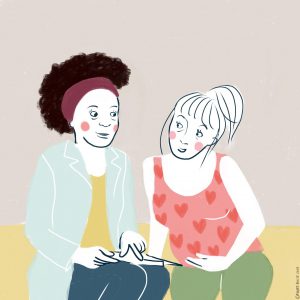 How did the idea to co-produce the maternal request guideline working with service user representatives come about?

It came from the clinicians who wanted to improve the care they offered.

How did you go about co-designing a new guideline?

We used a recognised process called ‘experienced based co-design’, which was developed by the King’s Fund. It uses the experiences of women (in this case) and clinical staff to re-design services taking account of the views of all those involved.

We talked to both of these groups separately and then shared our findings to check with both groups we had heard their concerns correctly. A workshop was then held with both groups to discuss findings and agree key areas for service improvement. A final workshop agreed changes to the pathway.

What were the main concerns raised by women and healthcare professionals?

Interestingly, similar key issues for service improvement were identified by both women and clinical staff. These were women having to discuss the request a number of times, delay in the decision for caesarean, women feeling judged, and that information for women needed improving.

You describe the co-design process as challenging and rewarding – tell us more…?

It was rewarding to see how keen everyone was to get involved to improve care.

It was challenging to keep the momentum going and finding time to get everyone together- clinicians and new mothers have competing priorities.

Was there anything that surprised you as you went through the co-design process?

The willingness of all those involved to engage in the project and the fact that both groups identified the same key areas for service improvement.

You talk about tension between the midwifery model of care and the medical model of care over this particular decision; can you tell us a bit more about that?

In this context, an added challenge was the professional tensions between the midwifery model of care and the medical model. Midwives are trained in a ‘culture of normality’ in which normal birth is promoted and valued and a women choosing an elective caesarean birth can feel like a failure to midwives although many would also feel that their role is to support a woman in whatever decision she makes.

The current Maternity Transformation Programme, with its focus on increasing choice and personalisation, may act as a tool to promote change.

Do you think the results would differ if carried out by other Trusts in other areas?

I would have thought that the same concerns would be raised by women and healthcare professionals depending on the current pathway. Having the support of a research team that understands maternity care was really helpful but in principle this sort of process could be carried out by any Trust working with service users.

Some Trust policies are a result of local commissioning pressures and it would be important that commissioners were involved in the co-design process too.

What advice would you have for other Trusts looking to review their maternal request caesarean policy?

It does take time and commitment so it would be important to get buy in to the project, make a clear plan and keep going to the end.  But the resulting policy will be worth it.

What advice would you have for other Trusts looking to use co-design to revise any maternity guideline or policy?

It is the best way and Better Births, the national maternity review which is now being implemented, says that “Local Maternity Systems should be responsible for… ensuring that they co-design services with service users and local communities”.

The mechanism for doing this is through Maternity Voices Partnerships. You can find more information here. Co-design ensures the views of all parties are considered and included and enhances understanding of the issues involved.

Read more about this project here.