This week a court in Brazil authorised the forcible removal of a woman from her home and the performance of a cesarean section against her will. You can read the Brazilian news reports here, translated here. 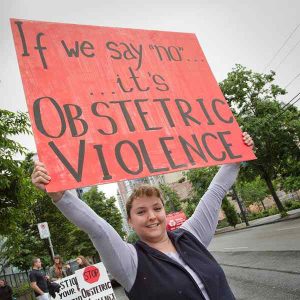 The justification? An obstetrician told the judge that a c-section was necessary to protect the fetus from potential harm. The mother did not suffer from any mental health disorder, she had mental capacity, and she had agreed to labour naturally in hospital. Her crime? According to news reports, she was deemed ‘high risk’ because she had had two previous c-sections and her baby was breech. She was in well-established labour when she was taken from her home by police and medical personnel.

Risk can never be a justification for authorising a violent physical assault on a woman. It is a very poor basis on which to make judicial decisions that have a long-lasting and profound effect on a person’s physical integrity. Risk might sound appealingly scientific and rational, but it is not. The risk of uterine rupture is around 0.5%. Put another way, there is a 99.5% chance that it will not happen. Which way you look at it depends on your personal sensitivity to risk. Some obstetricians would present the risk in one way, others would present it in another. Some support a woman to have a vaginal birth after two c-sections, others would recommend a c-section. Risk can never provide a sound legal basis for justifying an assault. When it is used to compel women to receive medical interventions, it is an expression of violent patriarchy, pure and simple. Would a Brazilian court order a man to undergo an invasive kidney transplant to save his dying child? No. Only women’s bodies are treated as public objects subject to the whims of the medical profession backed by the coercive power of the state.

Brazil is known for its appalling treatment of pregnant women. The United Nations Committee on the Elimination of Discrimination against Women ruled in 2011 that health services in Brazil discriminated against a pregnant woman after she miscarried and was left to die in a primary care clinic. Risk to women’s lives is overlooked, risk to the life of the fetus apparently justifies grossly disproportionate state intervention.

We must hope that the response to this case will mark a sea-change in the treatment of pregnant women in Brazil.